The Importance of Maintaining the Moral High Ground

In this post I will talk about making sure you maintain the Moral High Ground when dealing with vendors during critical support escalations. 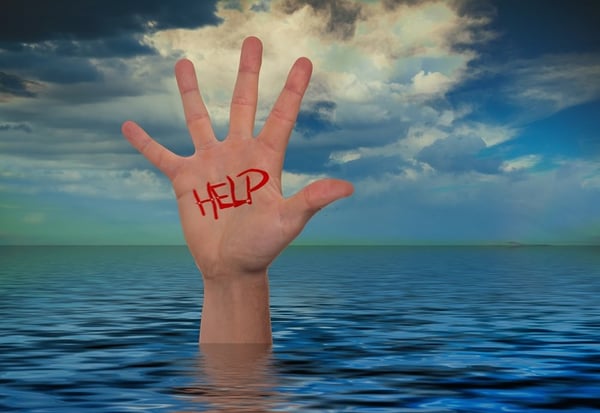 Remember that in these entertaining situations where services have gone sideways, you’re asking people to help you, you’re empathizing with their reality, and you’re trying to communicate enough information so that they can empathize with yours. Plus, you have to do all of this within the confines of what limited power you have at your disposal. This is a complicated balancing act, and the moment you misstep and hit the edges of any of these scales, the balance will swing wildly in the other direction, and not in your favor. Next thing you know, Mel’s going to toss you out on your ear, and you’ll be very much looking for a new place to eat lunch. (If you don’t know who Mel is, please be sure to go back and read the previous posts. For those who are following along, I’ll stop re-explaining him so as not to drive you crazy.)

Some very basic principles are certainly good starting points for maintaining the moral high ground. It’s pretty simple to start with things like “never raise your voice,” “never be insulting,” “never use profanity,” “never threaten,” etc. Or, basically, “do unto others....,” or... more pointedly… “don’t be a jerk.” But there is more to it than that.

When discussing this, I like to draw a graph on a whiteboard, similar to this: 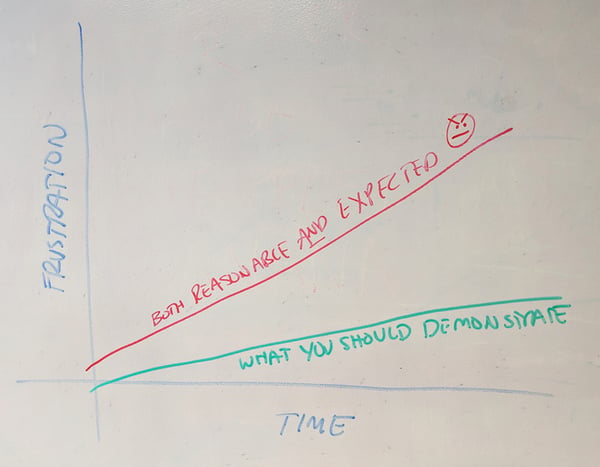 The idea here is simple enough. What we’re saying is that your level of frustration with a failure to fix a problem is likely to increase over the course of the life of the issue, but the level of frustration that you demonstrate to your vendor must always be significantly less than that, and should not rise in intensity at anywhere near the same rate. In fact, it is almost a plateau- or becomes one- because you cannot allow yourself to reach the point where you’re reacting near the level where you feel justified. This is in part because you’re probably angry and not being entirely rational, but mostly because once you tip that scale over into “Oh, he’s being a jerk,” you’ve pretty much lost.

Imagine a situation where you expressed what you felt was an absolutely justified level of frustration at the person on the phone. What happens? The first thing is that the person may decide you’re being “a jerk,” which may mean you’ve tipped the empathy scale harshly in the wrong direction. And now they’re mad at you. So they probably have no personal interest in helping you. Next up?

Unfortunately, they may start thinking along the lines of “what can this person really do to me?” and that means they’re assessing your limited power. If they decide there’s not much risk in them simply brushing you off, they likely will. They have a whole bunch more calls with other people being jerks, and they don’t have any reason to spend too much time dealing with yours. [Insert long hold time followed by a dial tone here]

Conversely, when you are being civil despite the fact that it is absolutely obvious that you should be all but losing your mind, the person on the other end of the phone is likely going to be totally amazed you haven’t yelled at them. They are more likely to empathize with your situation because of all the effective communication you’ve been practicing, and their internal thought process is going to be “Holy help desk, Batman. If I were in this situation I would be enraged. And this person is being calm and respectful to me. We need to help!” [Insert 60s Batman cut-take here… and Batman cut-takes are way more pleasant than dial-tones!]

See how it all ties together?

And yes, everyone’s internal thought process does absolutely include Robin making ridiculous remarks and jumping into the Batmobile.

Here’s a real-life example. As I mentioned in our first post in this series, ValueFlow Industries (our example company) took way too long to fix an urgent problem. (Literally months.) I was very frustrated, as my team had done everything we possibly could to fix it and had done everything that the vendor had asked of us to, even when it didn’t make sense. (We understood our limited power situation, and understood that if we did not cooperate, that we would be shut down pretty quick.) And still, this major issue persisted. This was literally the worst support situation I had seen in my entire career, and I cannot ever imagine seeing its equal again. However, over the course of time, I managed to collect the contact information and the ear of a significant person in the line of support.

(We’ll discuss Networking in a later post.) I had been speaking with him throughout the process, but at this point I had had enough, so I got him on the phone, and started my discussion with him as follows:

“I want you to know that I appreciate your involvement in this issue and your continued diligence. I want you to also know I feel you are due the same level of respect as any other person, and so I’m going to speak to you about this frustrating situation in a what I hope is a calm and civil tone. However, it is extremely important to me that you understand that my tone is not representative of my feelings, and, more to the point, that to express my current mental state as something akin to ‘blind rage’ would be an understatement.”

This is what I like to call “flipping the table with decorum and dignity” which, as you can imagine, is a challenging thing to pull off.

A lot happened after that conversation, but that talk occurred at 5:30 PM on a Thursday evening, and a $50 Billion revenue company almost immediately put one of their best engineers on a plane that night, and they were onsite the very next morning. And that engineer stayed until the problem was resolved. And at absolutely no expense to me or my customer (though I did make sure my engineer onsite took him out for meals at our expense. It was just the right thing to do). If you’re reading this, Mr. Support Engineer or Mr. Support Executive from ValueFlow, we thank you so much for your efforts!

Now if I had started that phone conversation with that upper-level support executive by expressing to him exactly how I felt at that time, in the exact language that was running through my mind at that moment, my preamble would have likely consisted of a string of profanities and deeply cutting remarks about the quality of that person, the substandard nature of their organization, and possibly a short essay on how poorly he was raised by his mother. (Okay, maybe I’d have pulled up the reins before going quite that far, but boy I certainly would have wanted to go there.)

Needless to say, this would not have endeared me to this person, and I daresay this would not have resulted in this person falling over himself apologizing and doing whatever he could possibly do to help me… not to mention his regular follow-up calls to me to make sure all was well, the person getting an entire team of engineers and developers on the phone to also aid in the resolution, and he - himself - breaking away from his personal affairs over the weekend to check in… which is precisely what happened. He was completely on top of this thing from that fateful phone call, all the way to the very end.

Now an important thing to be aware of is that I had actually asked ValueFlow to do something like this some months prior, but they initially refused. It was stated plainly to me that this was simply not the way they do things and that I would just need to be patient and the issue would be resolved in the normal order. Totally frustrating because the “normal order” had already taken a month, but what could I do? They are massive, and my company is not. I didn’t have the power to actually make them do it. But in maintaining the moral high ground through this maddening affair, I eventually found myself in a strong position to “demand” it again, and - finally - successfully so.

Next in our series, we’ll discuss the often-overlooked importance of [[ Availability ]], and the surprising impact it can have on your ability to retain this critical moral high ground and, ultimately, to get your problem solved.

If you're interested in talking more about the business of IT management, feel free to contact me here.